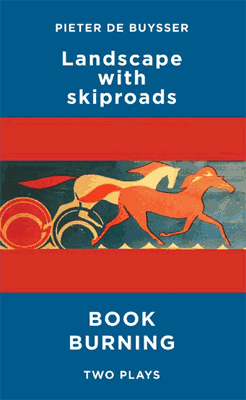 On stage, a collection of objects that have played a unique role in our history. Without exception these are the objects that were present at key moments in history. They were there when we became who we are today. When once more a stretch of our path was laid down for us, they were present in silence. With these, Pieter De Buysser, a boy and his horse are on a search for a lost future. A joyful and epic journey is taking off.

Read more on Landscape with Skiproads

You won't know the facts until you've seen the fiction.History is clogged. There are no more revolutions. What else can we add?A play about forgetting and forgiving, about knowledge and riddles and the lack of stories. Told by a cat, Book Burning is the story of a man who lights up while his daughter plunges into the trunk. Perhaps it is a fable. It could be a political, even a utopian play. Not because it soaks in good intentions and programs, but because it bets on the magical possibilities of language and radical imagination. Book Burning is not what it is but what it can become: a proposal for the beginning of a new world